David Halpern is the true “force” behind this (and several other) Artist Residency opportunity at Bandelier National Monument.  He initiated this Residency at Bandelier National Monument back in 2014!  David is a wonderful photographer now living in Santa Fe and continuing to volunteer with the National Park Service.  Especially now, since the seasonal staff are no longer supporting the full-time staff here at Bandelier, the park rangers are double and triple hatted and don’t have a lot of extra bandwidth to support explorations of an Artist in Residence… Don’t take that the wrong way!  This staff has been absolutely gracious and immensely helpful in answering all of my questions and requests!  David and I agreed well in advance that he would help me explore the broader areas of Bandelier National Monument which spans 33,000 acres!

First priority was to take a field trip to the Valles Caldera, the sight of the volcano and remaining crater and mountains left after the eruption that dispersed the ash that created the Frijoles and neighboring canyons!  So we declared Valles Calderes “in bounds” as the origin site for Bandelier National Monument.  David picked me up at 9:00 Monday morning and we traveled up Route 4 to our destination.  David is a fount of information having been involved with the park service in numerous National Parks over the years and having had access to areas no longer available to the public.  David pointed out all of the trail heads and which ones he thought could provide the requisite “eye candy” for artistic consumption!  There is no way I’ll be able to get to all the possible trails and sights…  the road continued to wind and turn, rising in elevation and the fantastic views… that was nothing!  When we came over the crest, around another bend and the golden expanse of Valles Caldera emerged.  WOW! 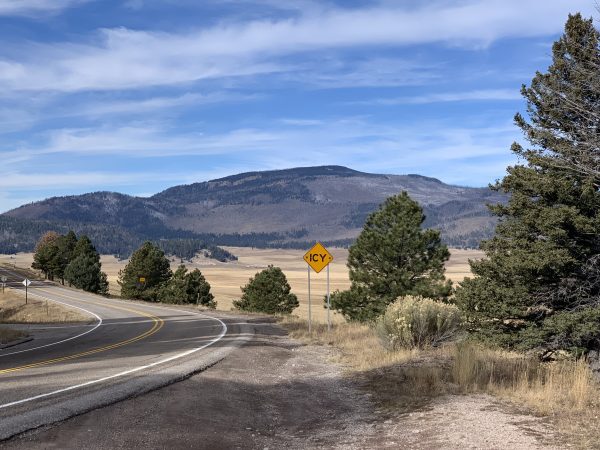 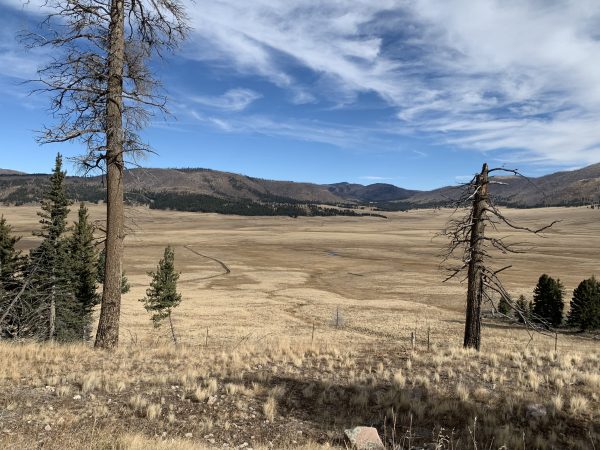 I started snapping pictures with the i-phone immediately… David wanted to stop so I could take better shots but we would never get there if I allowed him to do that!  I was impressed by the vastness and scale of the main valley.  It was initially an optical illusion, it couldn’t be that wide… until I realized the speck in the middle of the expanse just to the right of that mound of trees was the Visitors Center! 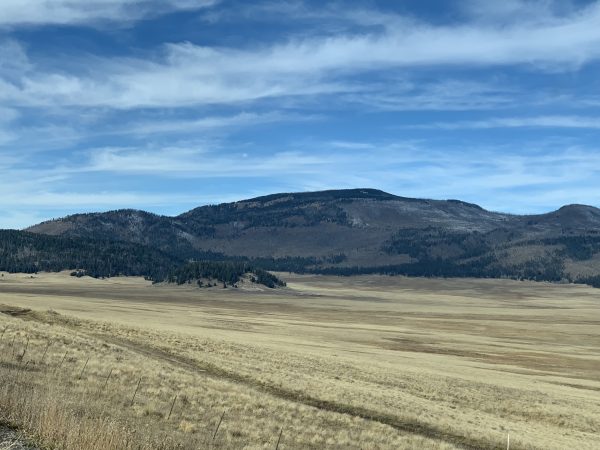 We turned into the main entrance and pulled over to get out and admire the East branch of the Jemez River winding through the valley and under the entry road.  Next, the cabin used in the the movie “The Missing” appeared to our left.  David indicated it was open to be explored if you want to hike over to it… again, things are further away than they appear so left that for another visit. 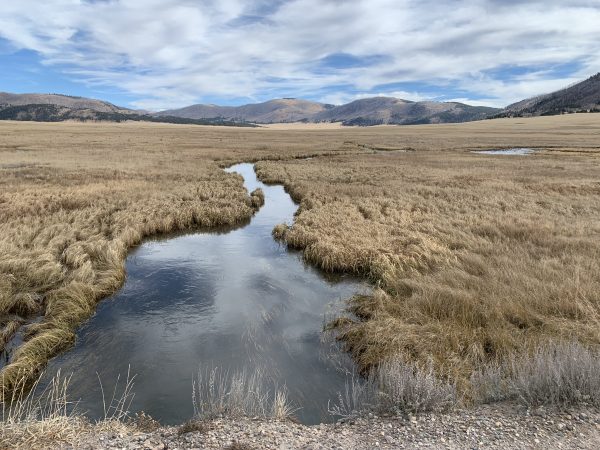 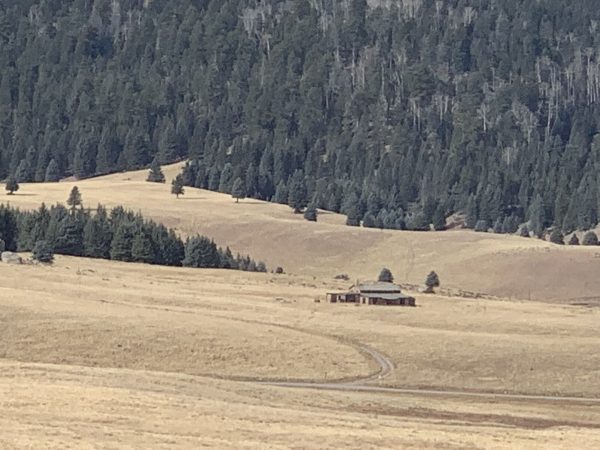 We checked in at the Visitors Center since they only allow a limited number of people to get a back country pass to access the more remote areas of the park at any one time.  We sighted the colony of Prairie Dogs chirping at us as we unhooked the gate to head into the back country.  David gave me the grand tour! 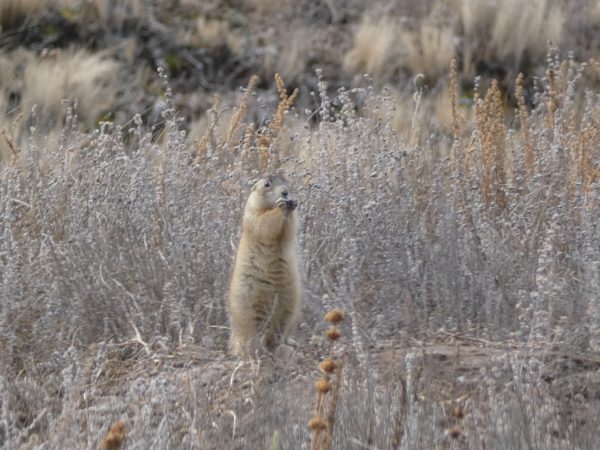 Apparently there was a working ranch here until very recently.  They are taking down all of the barbed wire fences and posts as evidenced by the stacks of both alongside the winding gravel road.  We had a blast pointing out things of interest to each other… “OH Look at that…”, stop, get out, take pictures… drive on repeat!  We drove and drove taking in the amazing scenery.  I was very excited to spot a coyote amongst the fallen tree trunks on a barren slope within the park.  Many mountainsides throughout the park looked like Armageddon had occurred with fallen and burnt trees looking like pick up sticks from the 2011 fire.  The park rangers said all of that dead fall is being left as it lay to decompose.  This seemed odd since there were other areas where we noticed neatly arranged stacks of wood within forests!  These are for planned burns when it snows as part of deliberate thinning of the healthy forests.  This was also evidenced by wood trailers stationed around the park to remove the thinned trees. 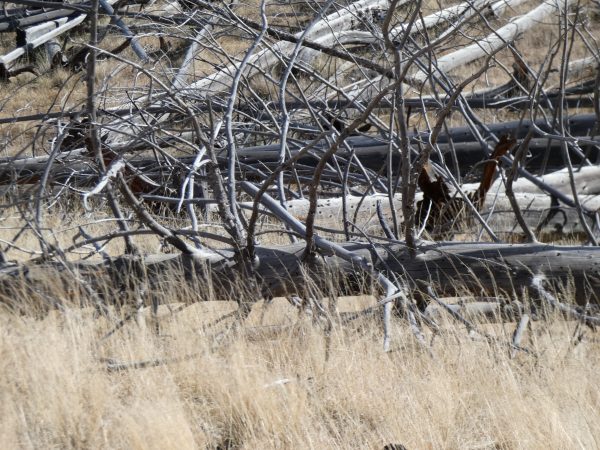 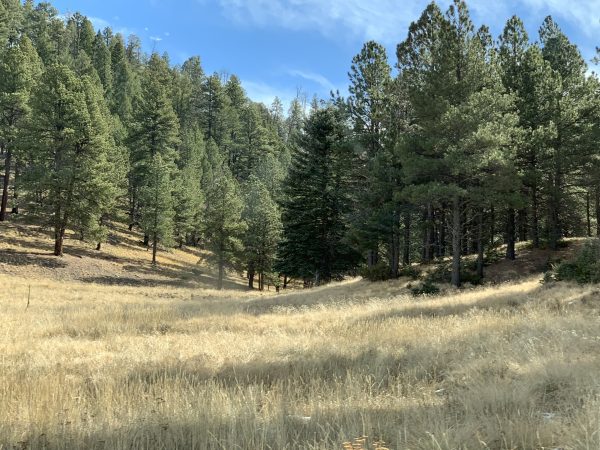 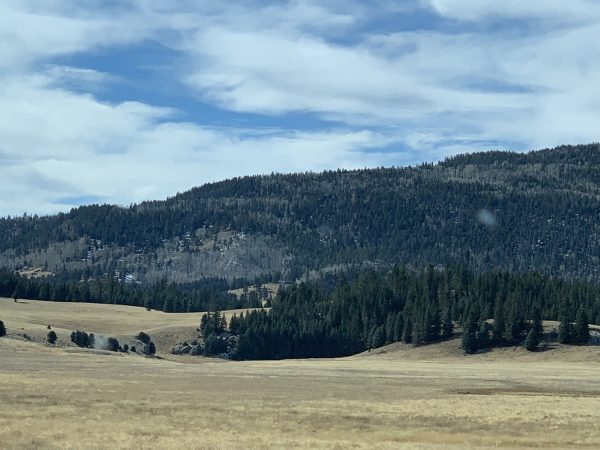 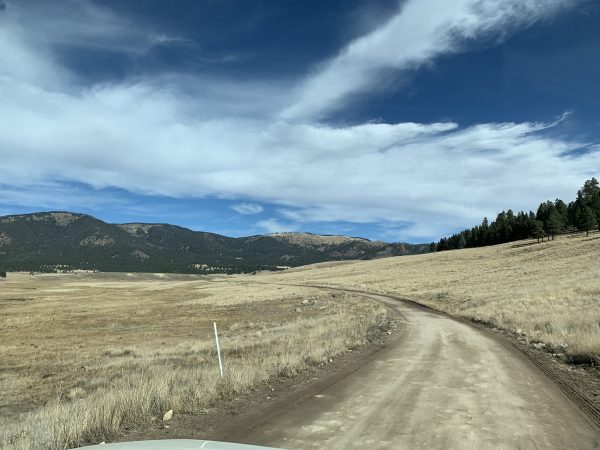 I was blown away by the size of the trout in the streams.  We encountered several fishermen but they looked so strange in the grass…  I couldn’t imagine being able to accurately cast a hook into such narrow bodies of water!  Three errant cattle kept the fishermen company until the trailer with saddled horses showed up to round them up! 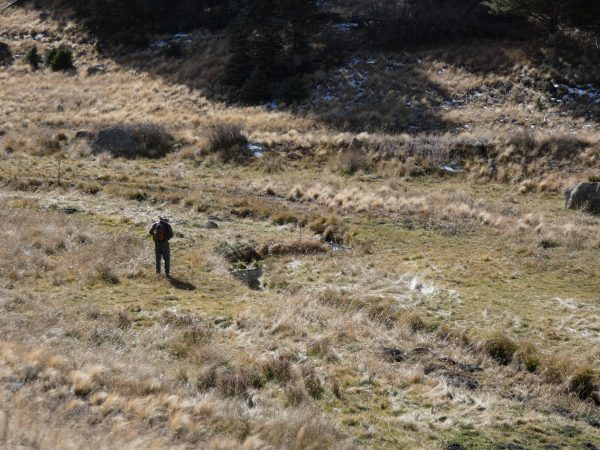 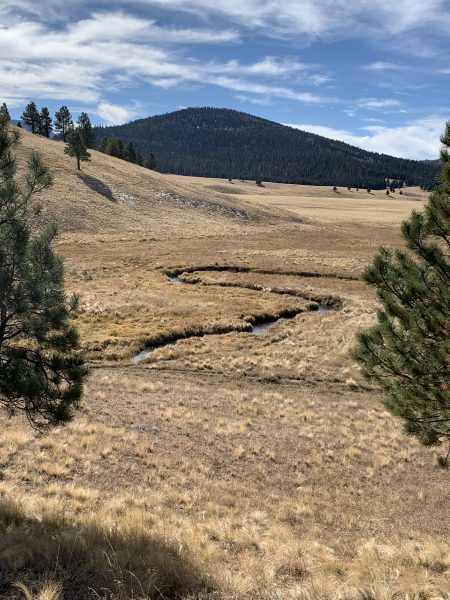 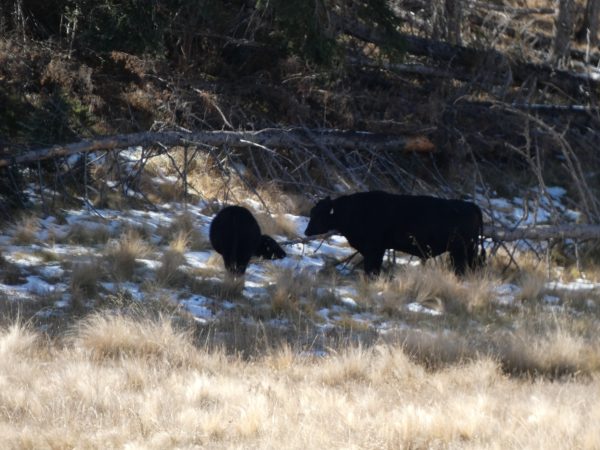 As we left the Valles Caldera, David continued our tour including rock formations, an obsidian field in the National Forest, and other canyons.  We then made our way into Los Alamos for a late lunch.  So glad David showed me the “back” way into town which avoided having to go through the official gate for Los Alamos National Lab! 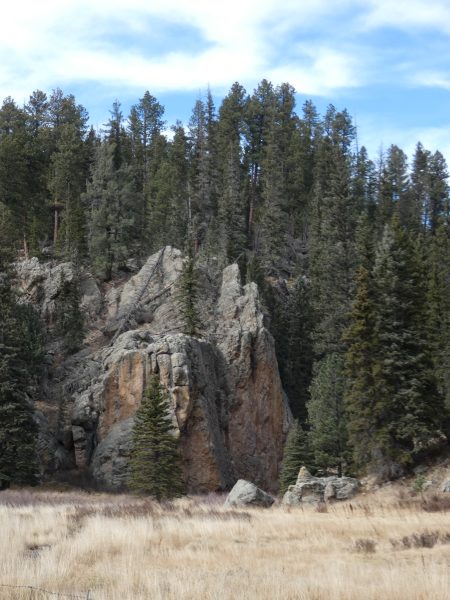 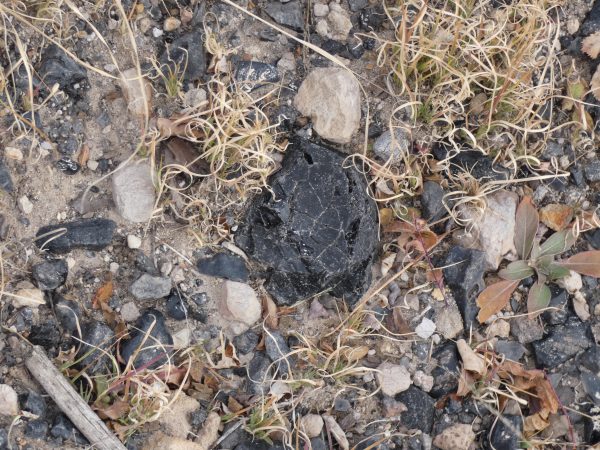 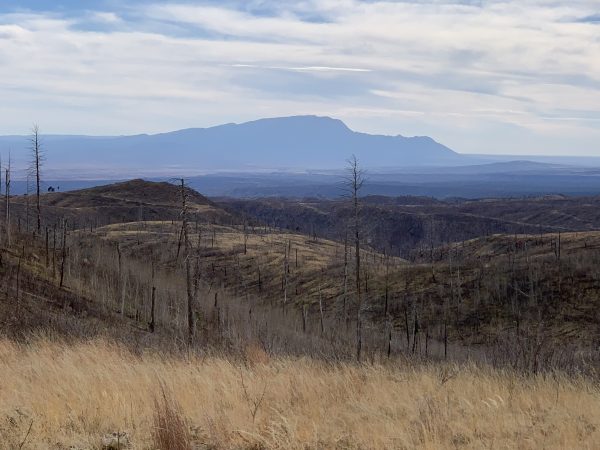 Finally, as icing on the cake to this wonderful day of touring the broader landscape of the area, David returned me to the Visitors Center at Bandelier National Monument and showed me the “hidden” park Library to ensure I had access during my residency.  We were both pleasantly exhausted!  It was overwhelmingly different and beautiful.  I will be forever grateful David spent the day as my personal tour guide of both Bandelier and the Valles Caldera!

If you’re interested in the other Bandelier Artist in Residence ~ Adventure  posts, here are the links so you can enjoy the full story!